From the 1st to the 8th of December, three young people from Youth Express Network took part in the youth exchange Democracy Builders, which brought together 40 young people from 8 different European countries.

Coordinated by one of our Romanian member organisation Association Youth Vision, the event aimed at supporting the active participation of young people in democratic life, developing the dialogue between them and representatives and facilitating understanding of the European legislative process.

“Over the week, we all reflected about what the European institutions are, like the European bank, the Council of Europe, the European Parliament and the Court of Justice of the European Union, and worked in groups on different workshops.

This week was very rewarding for me because I was able to speak in English all week but it still requires a lot of effort. It is important for me to work on topics that concern me to try to make a difference because as they say, youth is the future of tomorrow.

Being able to cut back from my daily life by participating in these kind of event allows me to continue to progress and to make the voices of young people heard.”

Aside from our work plan activities and the final seminar of our long-term project EU4YOU, Youth Express Network also took part in a unique Youth Exchange: “Crossing Borders”.

This Youth Exchange focused on tackling current topics such as migration, integration, identity and solidarity in a unique and original way: a mental and physical journey of 9 days on the English Camino to Santiago.

The project also included Storytelling as a tool to connect people and to tackle prejudices. It ended with an exhibition of the creations of the participants, testimonies of their experience on the Camino: stories, pictures, videos and various work of art. 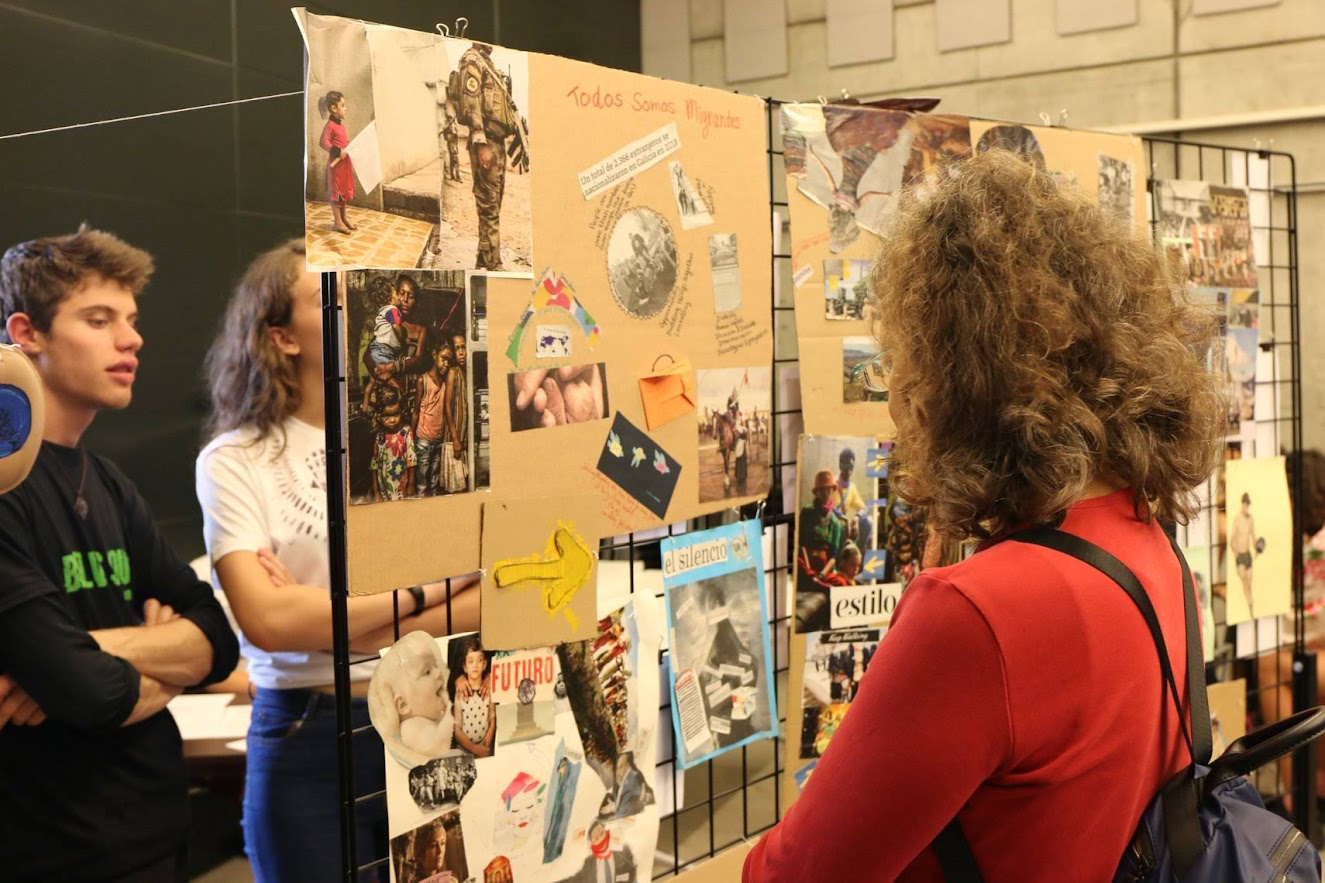 21 young people gathered in Constanta (Romania) between 20-28 of May for a training course aiming at encouraging the active participation and involvement of young people in the democratic voting process.

Youth Express Network was there, represented by a delegation of 3 volunteers from our French Member Organisation Parcours le Monde Grand Est.

This training course, coordinated by one of our Romanian member organisations Youth Vision, gathered partners from France, Greece, Italy, Macedonia, Portugal and Spain. It was supported by the Erasmus+ programme of the European Union. 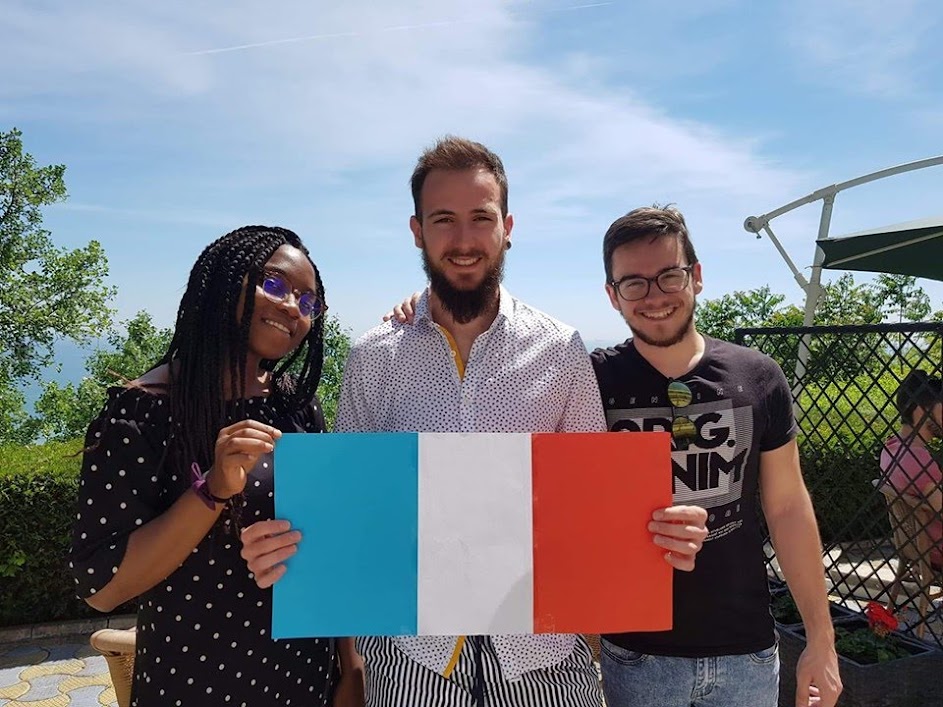 This project was set in the context of the European Election and aimed at promoting voting amongst young people. Over the week of work, the participants were able to find out about the Romanian political structure and atmosphere.

They shared information on the political situations of the various represented countries, and worked on creating tools, visual materials and messages aiming at encouraging the active participation and involvement of young people in democracy. 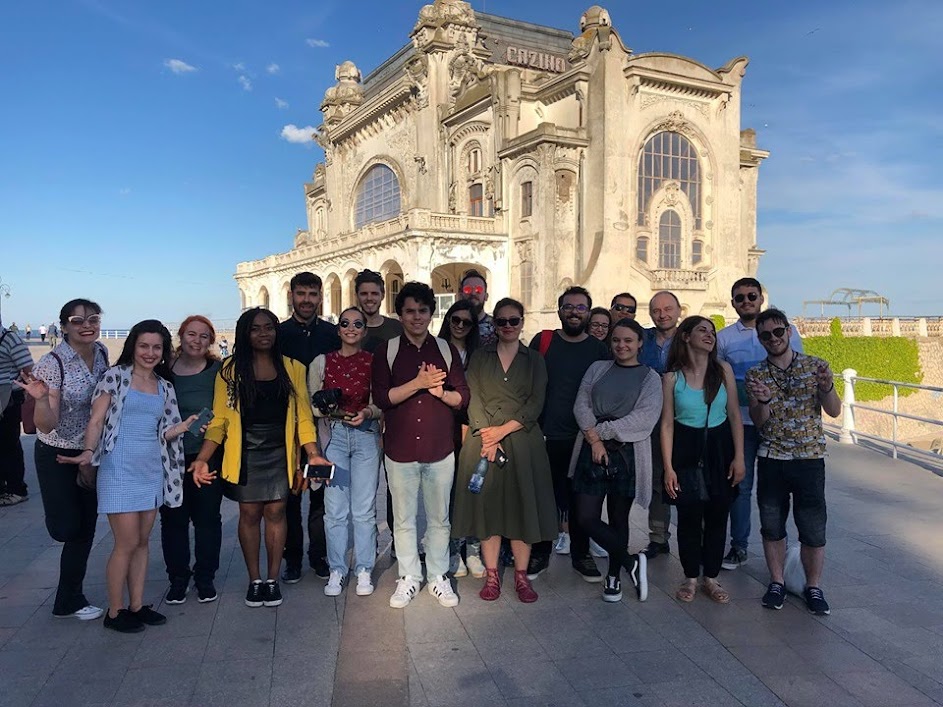 The participants also improved their knowledge on the European Union, the role of the European institutions and the European legislative process. As a result of the Democracy Builders project, the participants developed a toolkit with innovative methods to encourage young people’s active participation in democratic life.

This training course was the first part of a two-activity project. For its second phase, 40 young people will gather in Strasbourg in September for a youth exchange aiming this time at consolidating their ideas and perceptions about European policies.

“We feel very proud to be a part of this project and we also feel more involved about political life and about Europe in general 🇪🇺 We had a lot of great talks and debates about the socials and economics issues in the E.U but also about how to encourage youth to be involved and have more trust in the European Union. We want that the youngsters can figure out solutions to those problems trough non-formal and informal education, so we will keep promote it! 🙋‍♀️🙋‍♂️ We will come back in France full of knowledge and ready to share our experience with everyone!”

Youth Express Network was in Lithuania from the 14th to the 22th of May, to take part in our partner’s project “You & Me”, a training course on Sexual Education.

Coordinated by Active Youth, this training dedicated to Youth Workers aimed at enhancing youth’s ability to make conscious decisions about their sexuality and relationships, as well as their well-being and health. 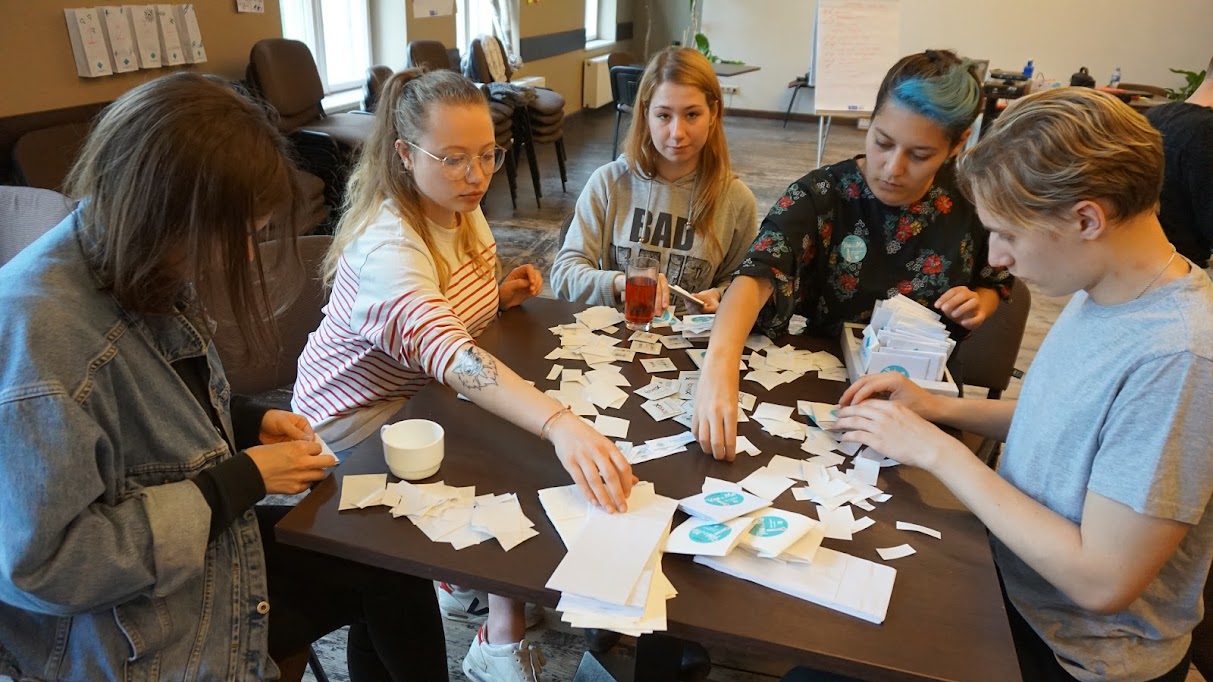 Together, they learned about Sexual Transmitted Diseases and Infections, contraception, comprehensive sexual education, diversity and sex language… On Day 2, the group got the visit of a member of the local Family planning, who explained to them how Sexual Education is implemented in Lithuania.

Thanks to numerous non-formal education activities, they also got to map the sexual education implemented in the other represented countries and reflect on how to teach young people about safe sex and break stereotypes surrounding the topics of sex. 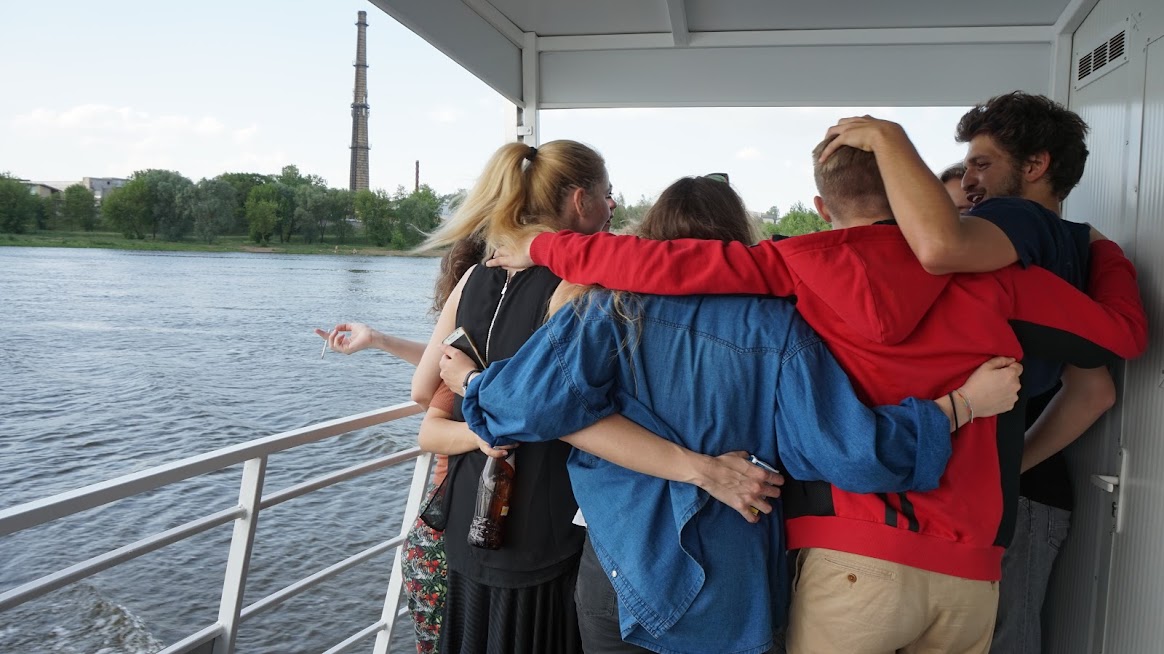 On Day 4, the participants went outside to meet with the local people of Kaunas. With their help, they conducted surveys about sexual education. Later the same day, the group distributed free condoms, raising awareness on protected sex.

The week ended with a video workshop which resulted in 5 video clips on the promotion of sexual education, safe sex and breaking stereotypes. These video will soon be published on Active Youth’s website 🙂 Stay tuned.

To celebrate our 25th year acting and networking towards Social Inclusion of Young People, we wanted to put a spotlight on some of the ENTER Recommendation, a tool we often use to teach Young People about the Access of Social Rights.

ENTER recommendation #8:
Breaking down segregation and the promotion of social inclusion.

Young people living in disadvantaged neighbourhoods often experience isolation and segregation. As explained in the ENTER Recommendation, measures can be implemented to ensure the access of social inclusion to young people with fewer opportunities, for example: reaching out directly to some of the most isolated and disenfranchised young people, offering them opportunities and addressing their specific needs. In this article, we will focus on examples of projects Youth Express Network and its member organisations have recently developed to facilitate the social inclusion of refugees and Roma people.

Our member organisation Nevo Parudimos association focuses its work on the Social Inclusion of the Roma communities, mainly young people. From August 2017 to May 2018, Nevo Parudimos implemented the project “Boosting Roma Youth Employment – B.R.Y.E.“, a mobility project for Roma young people and youth workers, supported by the Erasmus+ Programme of the European Union.

“Boosting Roma Youth Employment” gathered 6 youth organisations coming from 6 European Countries: Bulgaria, Hungary, Italy, Romania, Slovakia and Spain. The project involved 30 participants for the training, and 60 young people + 12 group leaders for each of the youth exchanges. As a result, this initiative efficiently increased capacity of all 150 participants to the labour market.

Our youth exchange “All Inclusive2” started this week and is currently taking place in Poronin, Poland. Financially supported by the European Youth Foundation and the Erasmus+ programme, it is the third activity of our work plan for this year: “Art.S.I: The Art of Social Inclusion“. It is hosted by our partner organisation Fundacja Instytut Innowacji

This Youth Exchange is gathering 42 people from 6 different countries and 8 organisations. Together, they will learn how to express themselves through art on the topic of social inclusion of migrants and refugees!

Amongst the various workshops and sessions that will be facilitated through the several days of activity, the young participants will get the opportunity of creating and performing a street event in order to raise awareness on Social Inclusion of migrants and refugees. They will address their message of inclusion directly to the inhabitants of Krakow, through art and the various tools they will have learned. 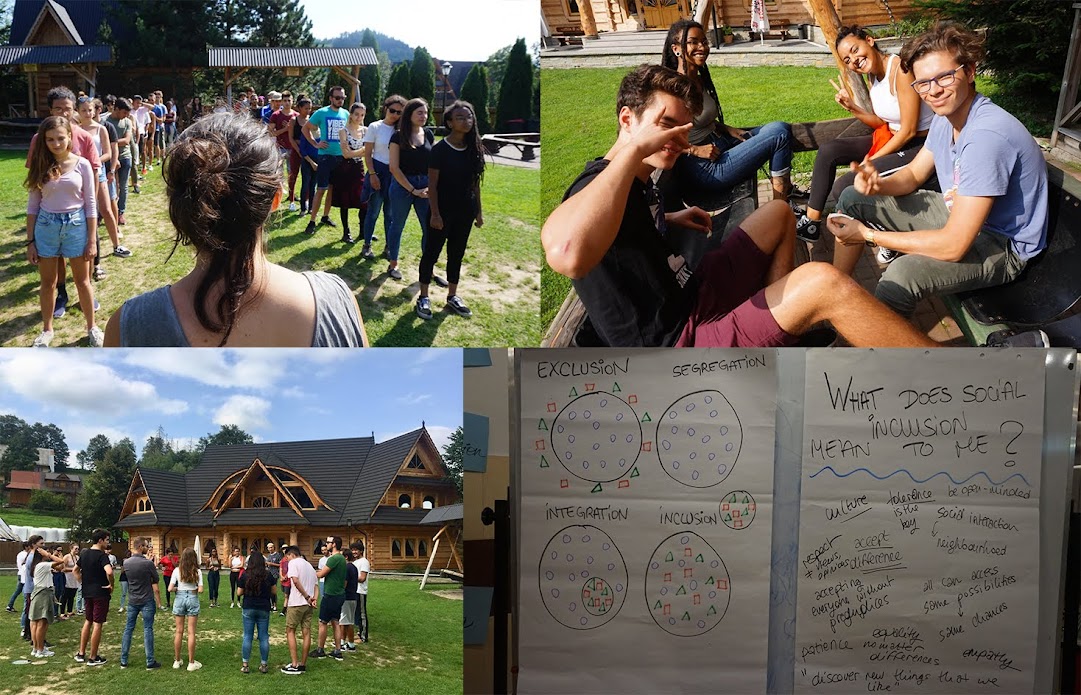 Our friend organisation HOP based in Ostia, Italy, is supporting the making of a documentary on migration: “Earth and Skin”. At the occasion of its fundraising campaign, HOP facilitated an action aiming at breaking stereotypes and invited the audience to participate in interactive games. The event was hosted at the Teatro del Lido (Ostia), on the 27th of October.

Can a man, leave his native country, feel belonging to another strange land?

In search of an answer, two documentarists headed to Calabria in Sant’Alessio in Aspromonte, finding themselves in a suspended reality in time, among uses and customs typical of the Calabrian tradition and new foreigners, who also bear a tradition, far away from a continent.

Sant’Alessio is a village almost uninhabited: it has about 150 inhabitants, 35 of which are migrants. In order to manage the problem of Italian depopulation, the Sant’Alessio Municipality, in collaboration with COOPSIA, has launched a SPRAR project through which the country has become a second reception center for migrants. Some of the houses abandoned by Sant’Alessioti are now home to the beneficiaries of the SPRAR project, thus promoting the development of the country’s micro-economy.

However, our question is still unanswered. Can a coexistence not always chosen, be free, spontaneous and jovial?

How can native and migrant inhabitants feel themselves belonging to a place where tradition and new culture coexist?

HOP decided to support the creation of a documentary that reveals this microcosm, internal dynamics, but above all the difficulties faced when leaving a place to reach another, yet capable of not only welcoming us as individuals, but also, above all, as human beings.

For HOP, it was the chance to play role-games to break stereotypes and use non formal education for a creative purpose. This helped everyone to really understand the ideas behind the project and in fact everyone participated with enthusiasm and was full of questions after all.

The games were proposed by Gaia and Andrea, from HOP and it was a fundamental participation to make the event a success for the community.

The event proposed were:

• The vision of the documentary teaser;

We are always happy to get mail from our members and friends, telling us what is happening for Youth and Social Rights throughout Europe! A few days ago, Sirarpi, one of our friends, also trainer in our pool of resources, send us a letter to give us news about Armenia and her meeting with Association of Social Workers of Armenia.

I hope my letter finds you well and in a good and positive mood.

I want to share with you some news about today’s meeting with Association of Social workers of Armenia and social organizations that are working in Kotayk region. I was in a meeting with them discussing the problems that young people and children are facing in the region.

During the meeting some main issues have been raisen, such as lack of information among families who are living in rural areas, educational difficulties that have young people in the region and Legislative amendments  that are going to be suggested to governmental bodies after evaluating the situation in all regions. More than 8 organizations’ representatives were present in the meeting and they presented projects that they are doing to solve the social problems that have young people .

During the meeting I represented the projects that our networks are realizing. I represented ENTER Recommendation and talked about how we can work together to implement one of its measures and support disadvantaged young people in Kotayk region. As future corporation we have arrangements for having meetings in the cities where the organizations are working.
Hope that everything will be realized soon and will have it’s roots in our inclusive society.

Réseau Express Jeunes /
Youth Express Network
Maison des Associations
1A place des Orphelins
67000 Strasbourg
FRANCE
+33 3 88 35 37 45
We use cookies to ensure that we give you the best experience on our website. If you continue to use this site we will assume that you are happy with it.Ok