We continue our 25th year celebration, with a closer look to a sixth ENTER Recommendation, the recommendation on Housing of Young People.

One of our French member organisations, the Association l’Etage, works every day towards the support of young people in difficult situations. The access to Housing is one of their main actions.

The cafeteria, opened all day, and the social restaurant, opened from 8:00 to 20:00, allows the organisation to create and keep a human contact with the youth population in difficult situations, often homeless young people. Each year, a thousand people come to the Etage for help and support.

For the past 15 years, the organisation has widened its services to new publics such as families or remote populations of all ages, but the young people are still the main beneficiaries.

Each year, the organisation implements various measures to support young people with housing:

Since December 2013, the organisation l’Etage also helps families “with uncomplete rights”. The Family Accommodation Center has developed considerably since this date. The center’s agreements have allowed the hosting and support of 518 people, including a majority of children.

The “Lézard au soleil” event, an art sale for the organisations

The association l’Etage organises each year an art sale called the “Lezard au Soleil”. The profits of this sale goes to a different association each year. On the 30th of June, 60 artists will paint on the docks of Strasbourg.

The profits of this 22th edition will go to a collective of associations of people hosting and supporting Syrian and Iraqi refugees to help them with their inclusion in France. Musical animations, drinks and food will also be proposed during the event. Link to the event on the image (French)! 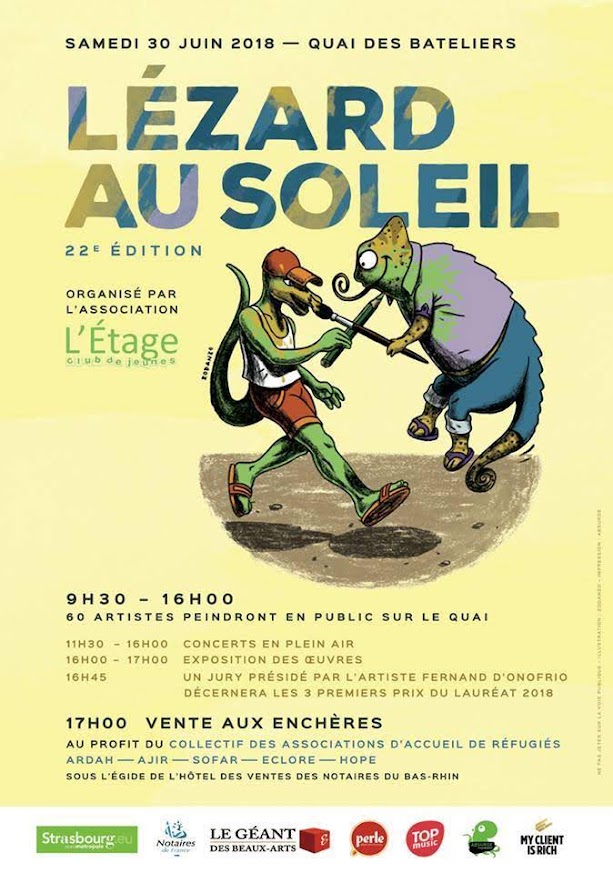